After Hurricane Florence, reports started rolling in of “giant mosquito” sightings – and bitings – throughout North Carolina. What’s going on with these mega mosquitoes that can be as big as a quarter?

As a mosquito biologist, I often get asked to identify a mosquito based upon someone’s verbal report of the little buggers. I usually do OK with an educated guess based on descriptions like “It had striped legs, and was brown” or “It looked kind of purple.”

What I have always struggled with is when someone says “It was little” or “It was pretty big.” For the most part, size is not a good identifying feature of the common mosquitoes Americans encounter close to home.

This is because you can grow relatively large mosquitoes or small ones just depending on the conditions where they grow up – what entomologists call their larval environment. If the larval environment has few other competing mosquitoes, or is rich in nutrients, or has a cool temperature, the result is larger adult mosquitoes.

Under normal circumstances, these giant, biting mosquitoes – known locally here in North Carolina as “gallinippers” or scientifically as Psorophora ciliata or Psorophora howardi – are quite rare. They are two of about 175 species of mosquitoes we have in the United States. Their moment in the spotlight comes after major flooding events, like we had with Hurricane Florence. These mosquitoes can be as much as three times larger than their more typical cousins. 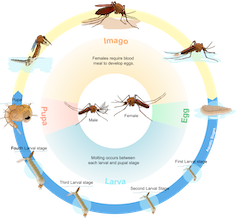 The gallinippers belong to a genus of mosquitoes that specialize in responding to floods. Females produce lots of eggs, which they spread out around areas that might flood, such as wet meadows, floodplain forests or even agricultural land. Those eggs are resistant to desiccation – that is, they aren’t damaged by dry conditions – so they can wait around for a flood the following year, forming an “egg bank.” The eggs are fertilized as the female lays them, from sperm she’s stored during mating. In order to get the blood meals necessary to make many eggs, these mosquitoes are aggressive feeders on mammals, and maybe other vertebrates occasionally.